With great sadness, we would like to inform the St Francis Today community of the passing of former editor Colin ‘Collo” Watt.

Collo had been battling poor health for a long time, and his passing is a thankful release from what he experienced the last few weeks. He can now rest in peace.

Over the last couple of years, Collo and I became good friends, which became even stronger when I took over his business, and he taught me the dark art of how to publish St Francis Today, on time, every weekday.

The act of Collo trying to teach a stubborn, fairly incompetent tech person like me was challenging, frustrating, and often hilarious for both of us. Over 20 hours, 2 hours a day for two weeks, we would sit side by side, and I would try and glean, and he would try and impart, with mixed results.

Some days we would simply give up on the tutorials, and drift off into uproarious conversation, about strange people, about wild past adventures, our friends and St Francis Bay. We would revert to drinking coffee, eating biscuits and talking the biggest load of crap for the entire two hours, solving the world’s problems with alternate rushes of caffeine and sugar.

Unfortunately, we couldn’t solve the ever-increasing problem of Colin’s poor health. So when those two weeks were over, we did most of our business talk over the phone as his condition deteriorated.

Collo was a clever guy, sharp of wit, with a sparkling sense of humour, and had absolutely zero inclination to suffer fools. He could alternatively be brusque, charming, bubbly, cantankerous and endearing, but he was always loyal and dependable for those who knew him well. Despite his condition, he was always up for a beer or two and a few laughs. He loved being around people.

He was always a phone call away, and I have many voice mails and WhatsApp messages on my phone, and that’s what I am going to struggle with the most. Whether it was a tech issue, or just a random chat, or an invite around for a quick beer, he was always just a phone call away.

He was one of few people on my speed dial.

As a matter of fact, he still is. 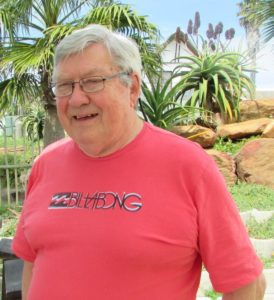 *St Francis Today and The Full Stop will be having a few drinks and snacks to celebrate the life of Colin Watt when the season is over. Collo’s regular night at the Fully was a Tuesday with Piggy and Jeff, so we will plan a Tuesday night fairly soon after the season when we can come together and have a few mellow drinks to celebrate the life of our friend. We will announce a date soon. If anyone has any photos of Collo, please mail them to news@stfrancistoday.com.dedi358.cpt4.host-h.net  If anyone would like to post a few words about Colin for St Francis Today, please do so in comments, or post to the same email address. We would love to see pics and stories.