The wreck of the Cape Recife, just outside Johnson’s Pool. Photo by Robin Moulang. For more of his work check out @gumboot.camera

Friday night was the Liquid Lines Masters Annual Dinner, held at Nevermind Restaurant at the Seal Point Lighthouse. Hosted by Haydn Holmes, the evening celebrates a year’s worth of swimming for those who swim in the Master’s Class at Liquid Lines.

It was an excellent evening at Nevermind, a beautiful setting for such an august occasion.

After a few early evening libations outside on the deck, we were ushered inside for some delicious starters and wine and good banter before the awards.

The first award was the Wooden Spoon award for that swimmer who causes the most kak during the year. Usually fought out by a few of the regulars, the award went to relative newcomer Brandon Harcus for his brilliant and consistent kak-causing during the year.

Lynne Odendaal was the proud recipient of two awards this year. First, she won the Abacus Award (of an actual abacus) For Those People Who Can’t Count. She never seemed to be able to retain the information on laps and times for more than a few minutes. Having said that, she did put in her time at the pool and won the prestigious Most Improved Swimmer award as well.

Mickey Lindsay, Garry Milford and Paul Duval jointly won the Invisible Award for being the most invisible people at the Masters swimming classes. Also to note, there were injuries, illness and COVID that worked together to keep them out of the water.

The Masters Swimming Blazer was awarded to the legendary Tim Briscoe this year. As Hayden mentioned, Tim is an ever-humble inspiration to all of the members of Masters Swimming. He is always full of positivity and thoroughly deserves to wear the blazer from now on. 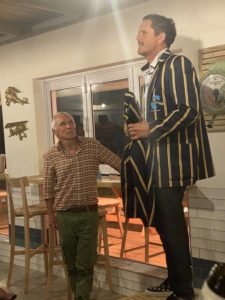 The Masters Swimming Group is indebted to a patron who supports the annual dinner and awards evening.

After the awards and the banter, it was time to gatecrash the party going on at The Lighthouse. An incredible venue for a party, it rocked on until Pumpkin Hour, when everyone’s brains stopped working at the same time. Then there was a mass ninja-bombing, and a great night drew to a close.