According to the latest report from the Department of Health, the number of active COVID-19 cases in Kouga totalled 90 as at 31 October.

“This is an alarming increase, given that we started October with 25 active cases.

“It is a serious reminder that the corona virus is still very much among us and we urgently appeal to all residents and visitors to exercise extreme caution,” said Kouga Executive Mayor, Horatio Hendricks.

The latest statistics put the number of active cases in Jeffreys Bay at 41, Humansdorp at 36, St Francis at seven and Patensie at three while one active case has been confirmed for both Loerie and Thornhill.

“This illustrates that no community is safe from the virus and that each and every one of us, regardless of where we live, has a role to play to help curb the spread,” Hendricks said.

The total number of active COVID-19 cases in the Sarah Baartman District as a whole stood at 475 on 31 October.

St Francis Animal Rescue is constantly looking for homes for both cats and dogs but once in a while a special case presents itself and they are reaching out to the community to help.

St Francis Animal Rescue found Fleck, a tiny, skinny white puppy, jammed in a cramped, filthy cage with a large white male, called Ghost – presumably her father. Neighbours in Sea Vista told us the dogs’ owner had been away for three weeks, leaving these 2 without food and water. We called the local SAP – who said they could not assist us, 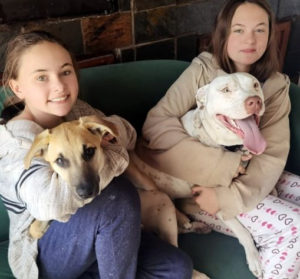 without permission from the owner. So, we removed the padlock from the cage and removed the two dogs. Ghost was adopted almost immediately and Fleck went from Foster Care to being adopted by a young family with two daughters. When Fleck was a little older, the family also adopted Chico, a male mixed breed puppy, as a friend for her.

Tragically, now that Fleck is 11 months old and Chico 4 months, the owners are separating and mother and daughters are soon moving into a small apartment which does not allow dogs.

St Francis Animal Rescue is hoping to re-home these two together. Fleck has no aggression issues – she is an affectionate, well-behaved, loyal and trusting young Pitty who has been sterilized and socialized.

Chico needs to be neutered and we will make sure this is done before he is adopted. He is a playful, happy, inquisitive, bright little pup – and both these dogs will make perfect additions to a young family with children.