It is a big congratulations to Manoa Robb, the official Round 1 winner of the Monster Combo. Manoa’s efforts see him win a R2000 Pollywog gift voucher and an entry into the final, with a chance to win R20 000 cash and his spot on an international surf trip with Matt Bromley and the Zag and Monster crews. Simone Robb feeling the good vibes too, banking R2k cash for her efforts behind the lens.

The window period for Round 2 begins today and closes 15 November. With only 2 months of competition remaining, don’t let a golden opportunity go a-begging. Grab your camera and drag your mate down the beach, get those combo’s down and send them in.

Here’s how the votes played out in Round 1:

What a round. So many good entries. At the end of the day, ZZ went with Manoa Robb, chased hard by Dylan Lightfoot and Royden Bryson. Manoa took the win thanks to the punch of his combo and the fluidity between moves. The point of difference being Manoa’s large and lofty full rote straight out the barrel, displaying ingenuity, variety and subtle tweaks with no hacking or flapping in between. A pleasure to watch.

We loved Gavin Roberts back to back man hacks, Royden’s upsidedown into barrel and repeat. Then there was Lightfoot’s absolute annihilation of an inside Supers bowl. Notable mentions need to go to Cyle Meyers for the decimation of the same Super’s car park bowl, Ducky’s threading of barrel into barrel into death float. Then there was Dries Millard’s inspirational story and what it takes for him to catch a wave, and Zoe Steyn’s backhand attack at her local spot. Still, we feel the timing, speed, and flow between a picturesque barrel and tail-high full rotation of Manoa Robb was precisely what the Monster Combo is all about. Therefore it gets our thumbs up.

Dale’s barrel on that first wave was super deep., but it wasn’t a linked-together combo. I was very impressed with Zoe Steyn’s wave, as she had amazing flow with critical surfing. Gav Roberts’ two massive turns to tube were really sick with that clean power. Royden’s was epic, along with Brad Scott’s, Chad du Toit’s, and Dan Thornton. Stevey Sawyer is so smooth. The barrels from Jacko, Dan Redman, and Josh Redman were insane, but not combos.

I think in 2nd is Manoa’s barrel to air. The barrel was really deep, and the transition was beautiful straight into that tail high air. Unfortunately, the wave wasn’t that solid.

The winner for round 1 for me is Dyl Lightfoot’s 3 turn combo. He did 3 mental manoeuvres, with so much speed, and flow, with hardly any hesitation between turns. The turns were hard, on the rail, with lots of spray and then holding that last bottom turn so long into that final, crazy, swooping carve. Loved it.

There were so many mental entries. Very impressed with SA’s surfing from all over the country. And Dries Millard, those two waves were epic.

We’ve already had 39 top quality entries. This year is set to be the busiest and most competitive Monster Combo ever. Onwards to Round 2 and some exciting announcements later this week!

Because it was a tie-break the public vote was decisive, with Manoa Robb edging out Dylan Lightfoot and taking the win purely based on public votes cast.

As for the Local Hero award, the votes were unanimous seeing Cyle ‘the man-mountain’ Myers smash his way and the lip into the pound seat!

The donation was made possible through the generosity of a family foundation in the UK which has chosen to fund projects and causes identified and facilitated through the St Francis Rotarians.

Dr Malan is also the attending medical practitioner at the St Francis Clinic in Sea Vista.

Defibrilators are regarded as a basic necessity in most countries and are usually available in all medical facilities, shopping centres, sports clubs, gyms etc. However, the only one available in St Francis until this time is owned by the NSRI, and stored at their base in Port St Francis. Dr Malan has access to this but at great inconvenience to his patient and himself, losing valuable time in a crisis.

Dr Jean Malan explains, “An AED (Defibrillator) is used to save lives directly when someone passes out and then gets shocked to get the heart going again.

A Holter is a simple device to monitor someone’s heart speed and rhythm for up to a week and clips onto a belt that a patient can carry around. It is used on a daily basis because of the information it provides. The one device also supplements the other. Both these devices will benefit the local population tremendously and we are extremely grateful for this donation.  It is literally life saving!”

“We were delighted to be able to facilitate this important donation to our community’s well being, particularly as it coincides with Rotary International Annual Health Day on 15th October,” said Santa Zeiss, Club President. 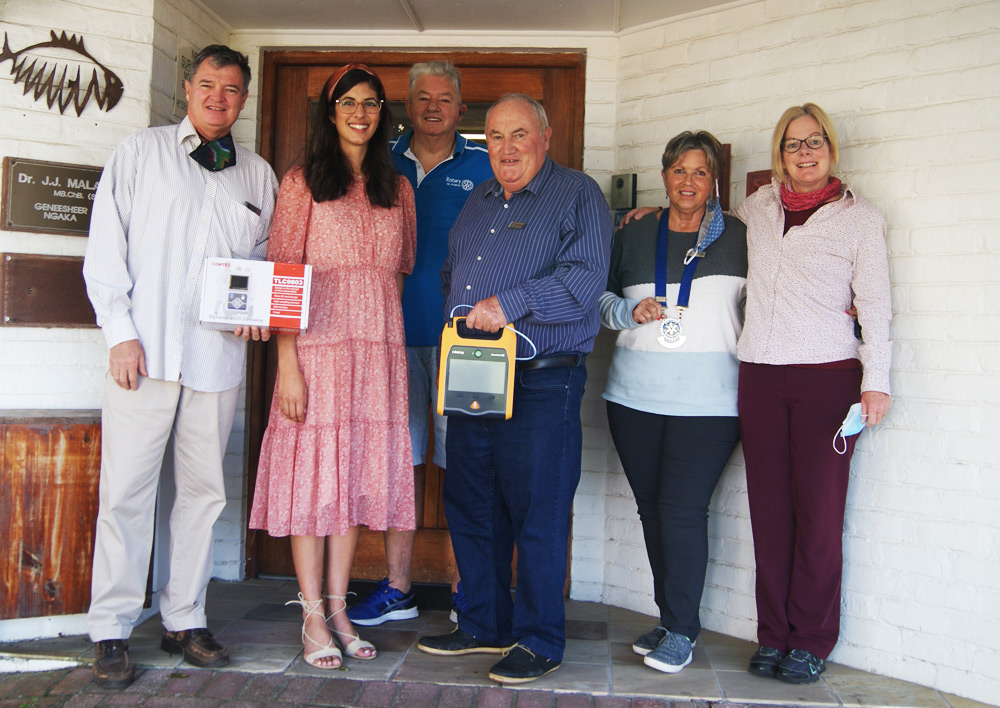 Kouga residents and businesses have been urged to continue using water sparingly.

“Some much-needed rain has fallen in the catchment areas, but not enough to make a significant difference to the dam levels.

“This means we cannot relax yet and must continue doing all we can to save water,” cautioned Kouga Executive Mayor, Horatio Hendricks.

He said the level of the Kouga Dam had increased by almost two percent this month following some rainfall in the Langkloof catchment areas .

“The dam level was at 8,09% at the end of September. This climbed to 9,03% on Monday this week, with further inflow expected.

“While this brings some relief, the level remains dangerously low and is not expected to increase far beyond 10%,” he said.

According to the latest information from Nelson Mandela Bay Municipality, the level of the Impofu Dam inched up from 18,55% at the end of September to 18,97% this week.

Photo by Jacques van der Merwe: The level of the Kouga Dam has increased slightly over the past week.