Stay safe in the water

With the beaches having re-opened and the weather warming up, Kouga Municipality would like to encourage the general public to be water wise when enjoying their time at the region’s beautiful beaches and other water bodies.
“Drowning is one of the top ten causes leading to death in the world,” said Kouga Community Services Portfolio Councillor, Daniel Benson.
“With spring having arrived and COVID-19 restrictions having been eased, our beaches and riversides are once again filling up with visitors. We want to urge everyone to exercise caution when enjoying their freedom and enjoying the water, especially as lifeguards are not yet on duty.”
He appealed to parents and guardians not to leave children unattended in and around the water.
“It can take as little as 20 seconds for a young child to drown,” he cautioned.
“It is, therefore, important that children are supervised when playing at the beach or lagoons.”
He emphasized that caution was just as important at lagoons.
“Do not be misled by their flat and calm appearance, as this gives a false impression of safety,” he said.
He further urged children and adults not to attempt recovering a ball or any floating device that is being swept out to sea.
“It is most likely being swept away by a rip current or blown by a strong Westly wind. Trying to retrieve it is not worth it – your life is way more important and can never be replaced or bought.”
Kouga Tourism Portfolio Councillor, Frances Baxter, said the opening up of the beaches and Tourism sector was good news for the region’s economy.
“We look forward to welcoming tourists back and would like to invite everyone to enjoy our beaches.
“Let us avoid any further heartache and grief by exercising caution and staying safe when in or near the water,” she said.

FAMILIES living in informal settlements are being equipped to help prevent fires from razing their homes. 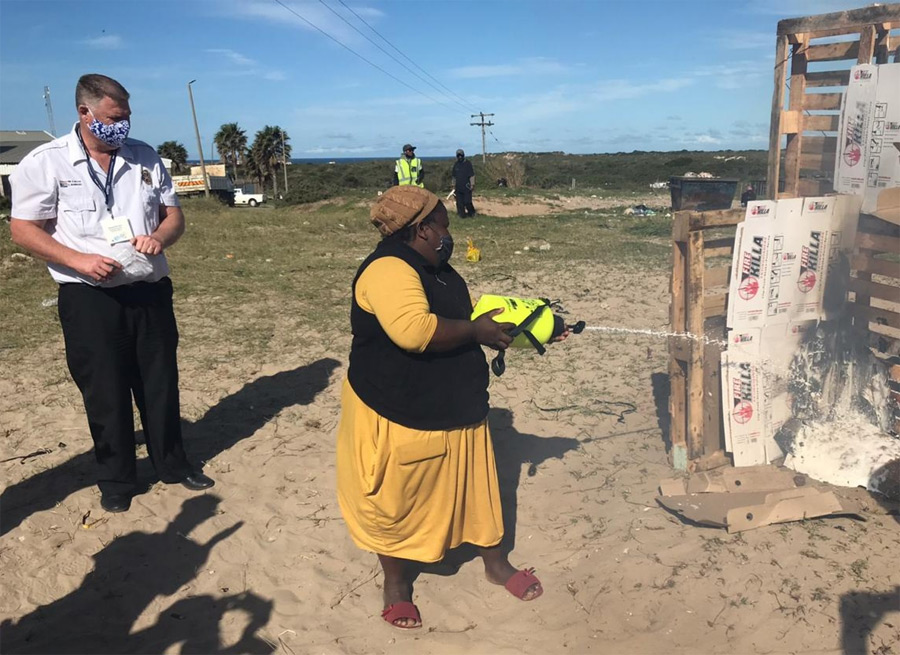 Twelve residents from informal areas at Sea Vista have been armed with innovative new fire extinguishers, specifically designed to kill small fires and saturate the immediate vicinity so as to prevent flames from spreading.

“The extinguishers differ from standard ones in that they are made from plastic and are not pressurised,” he said.

“The unit consists of a plastic bottle, containing a non-toxic solution of a special formula, water and a foaming agent. There is also a cartridge containing an activator which, when required, is released into the water by means of a hand-activated plunger.”

He said once activated, the extinguisher produced about 10 to 12 litres of foam, dispensed through a nozzle at a rate of about one litre per second, to cool and smother the flames.

“The extinguisher is re-usable and can be recharged by replacing the cartridge and solution.”

Benson said 12 residents from Sea Vista had been trained to use the new extinguishers and had each received a unit to help combat fires in their settlements.

“We will also be training and arming residents in other informal areas at high risk of fires,” he said.

“We believe innovation is key to achieving service excellence and keeping our communities safe,” he said.

“We are especially pleased to be able to support South African innovators and entrepreneurs as opposed to looking elsewhere for solutions.”

Member of the East Cape Provincial Legislature, Vicky Knoetze, commended the municipality for being open to new ideas.

nguishers differ from standard ones in that they are made from plastic and are not pressurised,” he said.