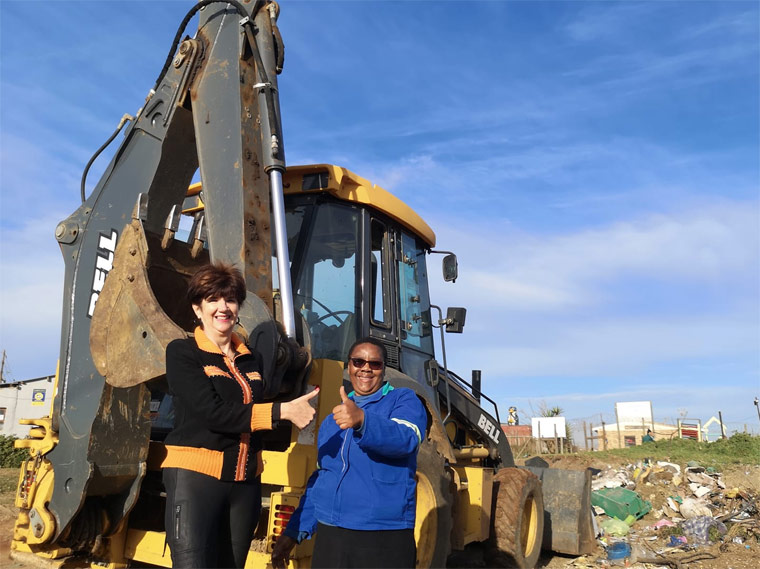 A former litter-picker is clearing a new career path for women at Kouga Municipality.

Nokufika Mvundla (46) has become the first woman to be appointed as a plant operator at the municipality.

She passed her test to operate a tractor loader backhoe, commonly known as a TLB, in May and will now be handling one of these yellow giants for the municipality’s Waste and Environmental Management section.

“Nokufika has been on the frontline of the Keep Kouga Clean campaign since the very beginning,” Kouga Executive Mayor Horatio Hendricks said.

“She has been working as a litter-picker these past ten years and has now exchanged her litter-picking tongs for a TLB.

“We wish to congratulate her on obtaining her certificate of competence and trust that we will see her moving on to even bigger machines in the years to come.”

A widowed mother of two teenage sons, Mavula said she was looking forward to the new challenge.

“The support from my co-workers has been incredible,” she said.

“Many people still see operating heavy machinery as a man’s job, but technology has advanced to such an extent that skill, rather than strength, is required when handling them. This opens up tremendous opportunities for women,” she said.

“She was one of four staff that were sent for training so that there would be at least two TLB driver, focused on waste management, at all our main units.”

He said illegal dumping was a challenge across the region.

“Not only is it unsightly, it is also a health risk to communities,” he said.

“The municipality cannot win the war alone. Residents also need to do their part by reducing the amount of waste they generate and by adopting a zero-tolerance stance towards littering or dumping.

He said most households in the region had received wheelie bins over the past 13 months and that the roll-out to all areas would be concluded in the new financial year.

“There are also skip bins at many of the dumping hot spots. We plead with residents to put their waste in the skips and not around it. Please avoid sending children to dispose of garbage in skips as they are often too small to reach the opening.”

He said illegal dumping could be reported to the municipal call centre on 042 200 2200 (option 5) or through the Link Powered by Vodacom app, which can be downloaded for free from Google Play or the App Store.

NSRI are appealing to bathers, paddlers, body borders and surfers to be cautious along the Southern Cape coastline and the Eastern Cape coastline, in particular around the coastline of Plettenberg Bay and between Mossel Bay and Jeffreys Bay, due to a high number of reported White shark sightings and White Shark close encounters.

The increase of sharks at this time of the year is part of the normal aggregation of these animals that take advantage of natural prey like seals and fish close in shore.

A large amount of shark sightings and some encounters have been reported close in shore along the Plettenberg Bay coastline over the past few weeks, on Sunday and today.

Drone footage of a large White shark in close proximity to surfers in Plettenberg Bay on Tuesday highlights the urgency of this safety appeal.

Sarah Waries of City of Cape Town (CoCT) Shark Spotters programme has told the NSRI “The behaviour seen in this drone footage shows that the shark is aware of the surfers and is investigating the surfers. It is important for people to remember that White sharks are naturally inquisitive Apex predators and that although shark bites are rare, water users must understand the inherent risk associated with sharing the ocean with these animals and change their behaviour accordingly to avoid encountering sharks.”

To reduce the risk of encountering a shark the public are urged to familiarise themselves with the following safety advice:

FOSTER has been responsible for proclaiming and managing the reserve network in the St Francis region since the 1980s.

It does this with the full support of the Kouga Municipality which owns the land and, to this effect, has a Memorandum of Understanding with the Municipality.

Recent Facebook posts have raised concerns about aspects of FOSTER’s management policies and actions. Our responses appear below.

Concerns have been raised about the blocking access by cyclists to the wildside path. The following points are relevant:

This path has been a pedestrian path since the 1960s; only in the last decade – and increasingly in the last few years – has it been used by cyclists.

The path is narrow, windy and traverses wetlands; cycling endangers pedestrians as well as the environment.

FOSTER has adopted the cycle-access policy of South African National Parks, the premiere conservation organization in the country. This policy stipulates the separation of cyclists and pedestrians by restricting cyclists to old vehicle tracks that are wide enough to enable the safe passage of pedestrians, and have a surface resilient to the impacts of bicycles.

Thus, consistent with this policy, FOSTER has identified a network of routes through the reserves that are accessible to cyclists and identified those where cycling is not permitted (see map showing cycle routes). FOSTER has garnered the support of the St Francis Cycling Club for this policy, and continues to consult with them on expanding cycle routes in the reserve system.

According to this policy, the wildside trail is identified as a pedestrians-only route. Signage placed to indicate this has been vandalised on several occasions and cyclists have persisted using the trail.

We have been monitoring wildlife via camera traps since 2013, in order to understand relationships between human and dog traffic on the one hand, and wildlife abundance on the other.

Results of this monitoring have shown that while wildlife sightings have declined with the increase in traffic over time, overall wildlife abundance has not; the animals are using alternative routes to those that are heavily used by humans and their dogs.

We therefore have evidence to show no dog-wildlife impacts at this stage. However, if our ongoing monitoring shows this not be the case, we will, in full consultation with the public, adapt our policy accordingly.

FOSTER thanks the public for their support and appreciates feedback, positive or negative. This will help us to adjust our policies so that we can continue to provide a service for visitors while protecting nature.

Reader unhappy with blockades on the Wildside

There has been a fair amount of discussion on social regarding the barriers that FOSTER has erected along the walkways on the Wildside. here is one readers view.

“I am shocked and most disappointed with the barriers which FOSTER constructed in the pathway on the Wild Side in Cape St Francis. My reasons are as follows:

The St Francis Area is amongst other things advertised as a tourist destination and one of the attractions is “ A Walk On The Wild Side”.  As a result of these barriers a walk on the wild side has now become an obstacle course with distracting human intrusion in nature.  Also, one cannot walk there without risking injury.

These barriers create an unwelcoming atmosphere and are an insult to residents as well as tourists. Cyclists are treated as naughty children and in the process the hikers and runners are punished as well.  Surely the average person enjoying his/her outdoor exercise in this beautiful area, is able to read and understand the signs used for indicating different types of routes.

Extreme measures such as these are totally unwarranted and could even have a negative effect on tourism to Cape St Francis and possible new buyers of property.  It creates an unfriendly impression and testifies a relentless attitude towards cyclists and hikers to such an extent that everyone using these pathways is adversely affected. Surely this will affect property prices negatively.

May I ask: What is behind this?  Will the other nature reserves such as the Irma Booysen Reserve where different pathways are designated for cyclists and hikers be treated in a similar way in future?

My request is that the barriers are removed completely.

Until then of course my contribution to FOSTER stops here.”