LOS ANGELES, Calif./USA (Thursday, March 12, 2020) – Due to the rapidly evolving situation with COVID-19 and out of an abundance of caution for the safety of athletes, fans, and staff, the World Surf League (WSL) has made the decision to cancel all events yet to commence at all tour levels, worldwide for the remainder of March, including the opening event of the 2020 Championship Tour (CT) on the Gold Coast in Australia. Additionally, the WSL has canceled the Papara Pro Open Tahiti.

This decision is based on guidance from the World Health Organization, who has declared that COVID-19 is now a global pandemic, as well as the Centers for Disease Control and Prevention, governments and local public health authorities where events are being held.

“Coronavirus is having massive consequences for sporting events and gatherings of all kinds around the world, and we are no different,” said WSL CEO Erik Logan. “We did not take this decision lightly as we are aware that it has a significant impact on the surfing community. However, the health and safety of our athletes, fans, and staff are paramount. From the standpoint of social responsibility, we also take very seriously the role our events might play in accelerating the spread of the virus. We’ve been in close contact with our athletes and we feel strongly that this is the right thing to do right now.”

“The fluid nature of this situation is forcing us to evaluate things day-by-day, and even hour-by-hour,” Logan said. “As this continues to evolve, we’ll continue to adapt, endeavoring to make the next right decision each day.”

Based on the information available at this time, the WSL is not currently canceling any additional events beyond this time frame. The situation continues to evolve, and the league is closely monitoring and evaluating the status of upcoming events, including the next CT event at Bells Beach in Victoria, Australia.

The WSL is carefully considering the impact of these cancellations on its tours and will provide further information in due course.

For all events currently in progress, the WSL has implemented a range of safety protocols as well as protective guidelines for athletes and staff. These include information on travel advisories and restrictions so anyone traveling can plan their travel routes to and from events to best limit their potential exposure; additional hand-washing facilities and hand sanitizer at events; and minimizing surfer and fan interactions.

More than 100 households from Jeffreys Bay have moved into brand new houses after the unblocking of two RDP housing projects that were launched more than a decade ago.

The first 107 houses of 220 units planned for Pellsrus have been completed and handed over to their new owners.

“It is the first time in more than ten years that RDP houses are being handed over in Jeffreys Bay,” said Kouga Executive Mayor Horatio Hendricks.

“The municipality is proud of the role we could play in getting the project back on track and restoring the dignity of our communities.

“Not only did the municipality make the land available for the houses, we also ensured that the bulk infrastructure, including sewer, water and electricity, was in place.”

Hendricks joined the Eastern Cape MEC for Human Settlements, Nonkqubela Pieters, for the official hand-over ceremony of the R35-million project on Tuesday (10 March). 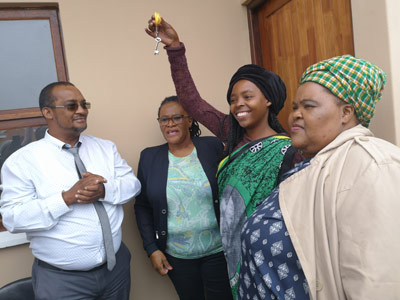 Among the beneficiaries who received their keys from the MEC and Mayor were grandmothers Deborah Magadu and Ester Nyondo, whose children and grandchildren joined them to celebrate the big day.

“I have been waiting for a house for longer than I can remember. My heart is full of gratitude and joy,” Nyondo said.

Babalwa Mbetshe also received the keys to the house of her late mother, who passed away before the hand-over.

The Mayor applauded everyone who played a role in making the project a reality.

“This has been a true collaborative effort and shows what we can do when everyone plays their part.”

He said the Ocean View RDP housing project was also progressing well, with internal services having been installed to 1 300 sites.

“The Kruisfontein 391 project was completed at Humansdorp last year and the Hankey 990 and Sea Vista 2 000 developments are also moving forward.

“Ward-based housing committees have further been established to improve transparency and strengthen communication between government roleplayers and communities.”