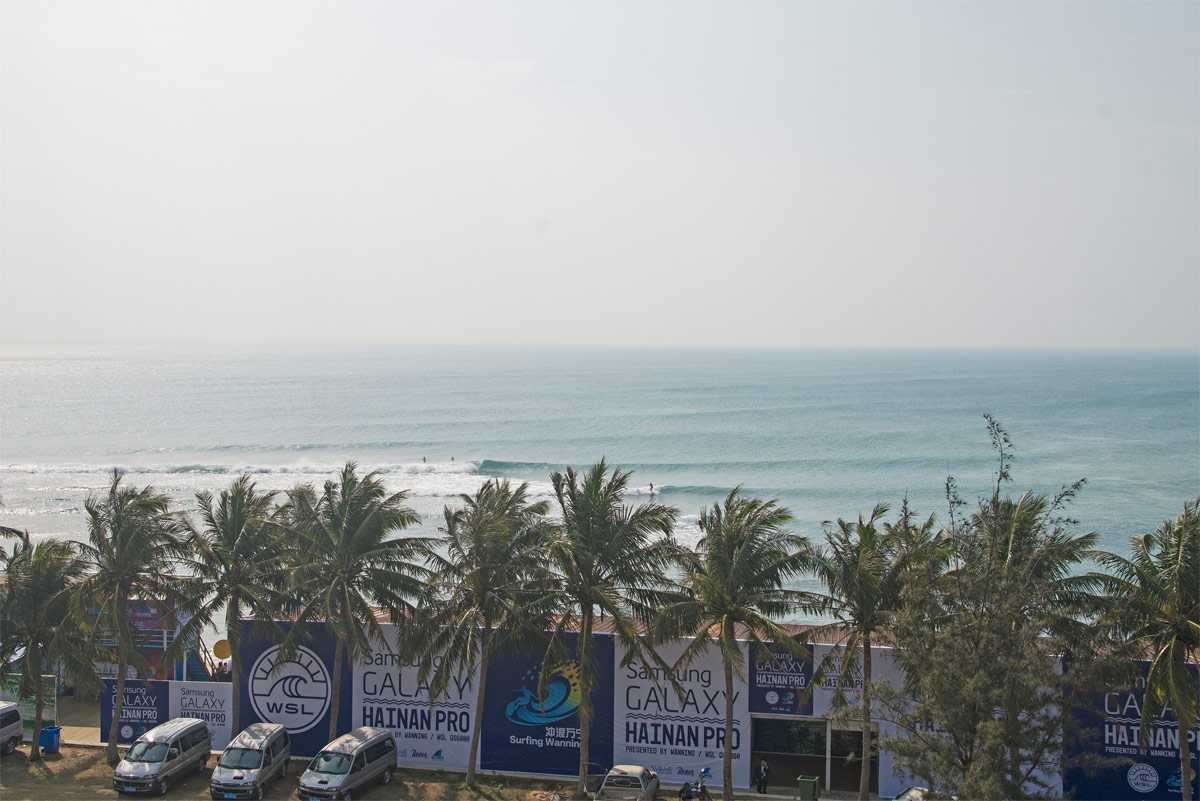 After a four-year absence the Qualifying Series (QS) is back at the beautiful lefthander of Riyue Bay for the Corona Open China QS 5,000. – Credit: © WSL / Will Hayden-Smith

Riyue Bay, part of the province of Wanning, offers surfers incredibly consistent long left-hand waves and breaks daily during the winter thanks to the relentless North East tradewinds. Located on the Island of Hainan in the South China Sea, Riyue Bay is a tropical paradise with palm tree lined beaches surrounded by beautiful mountainous forests and some of China’s most impressive holiday resorts.

The last time WSL had its presence on Chinese shores for the QS goes back to 2015 where Mahina Maeda (JPN) took down the event and became a qualification threat where she stayed until the final event – falling just short of the CT. The now 21-year-old returns to Wanning in hopes of replicating that performance after finding her form the previous two seasons, finishing No. 14 in 2019 after holding a qualification spot within the Top 6 for a short time, and make her long-awaited breakthrough into the world’s elite.

“I think Riyue Bay is a very special place and it’s very tropical like my home in Hawaii,” said Maeda. “The year we had the QS 6,000 there the waves were pumping after we got very lucky with a typhoon swell and not many people know how good the waves can get. A chance to win 5,000 points is awesome. Last year and the previous years I wasn’t able to accumulate the right amount of points to qualify and came up just a hair short. A win here or even a Final would definitely boost my confidence for the upcoming 10,000’s and would look good for my 2020 campaign.”

Hennessy made her CT rookie season one to remember with multiple finals day appearances, earning a Semifinal finish in Bali, and brought that confidence to the QS where she was able to re-qualify for the 2020 Tour. The 20-year-old now looks to kickstart her year with a return to Riyue Bay after garnering an equal 17th where she competed alongside some of the world’s best at just age 15.

“Riyue Bay was actually my second-ever QS so it’s pretty surreal and special to be going back,” said Hennessy. “From what I remember the island is beautiful and the lefthander is super fun. For me and my family it’s honestly pretty natural to be on the constant go so why not start the contest year at literally the start of the year (lauhgs)! For me I think the most practice in a jersey the better.

2019 was definitely a year where I learned and was inspired more than any other year. I think the biggest thing I want to achieve this year is challenge myself and strengthen my weaknesses. If I can even take some of those experiences to help me in this new year I will be happy.”

Duru makes his return to Hainan Island after seven years away in hopes of earning valuable points to re-qualify for the CT. – Credit: WSL/ Cestari

Frenchman Duru spent the last three years among the world’s best vying to keep his place there and now must return to the QS for a chance to get back to the Top 34. The goofy-footer will feel right at home on the lefthander, hoping to utilize his world-class forehand attack, after competing at the venue in 2012 and finishing with a Quarterfinal result.

“It’s really good to have a QS 5,000 at the start of the year,” said Duru. “I like no break and going straight back to contest mode. I went to (Riyue Bay) for the ISA and QS a long time ago. We had a good swell and the left was pumping so I hope to have it like this again. I don’t know yet (where my mindset is heading into 2020) and going to enjoy the contest and see where I’m going.”

China’s own Qui Zhou will be one of the representatives for his country on the men’s side of competition and is joined by fellow compatriots, event trials stand outs, such as Huang Yige, Li Yiguang and Wang Zefu among the eight surfers. Chinese women looking to mix it up with some of the world’s best include Huang Yingying, 20, who made an impressive showing at her local break.

“It’s really exciting and this is a big opportunity to learn from some of these professionals,” said Yingying. “Being from here and seeing them surf this wave is really amazing. I remember when the WSL first came here and now to be in this event is so exciting.”

Event organizers will convene at 6:30 a.m. CST to determine a possible start to either men or women’s Round 1 competition.

The Corona China Open QS 5,000 hosted by Wanning will run at Riyue Bay, Hainan Island, Wanning, China in the best conditions between January 6 – 12. Tune in live throughout the event window via www.WorldSurfLeague.com,