A fire broke out in the early hours of this morning in the Cape St Francis Resort. St Francis Fire brigade and the resorts own fire personnel as well as some members of the Disaster Volunteer Group (DVG) were quickly on the scene and managed to extinguish the fire before it could spread to the nearby row of thatched houses. The affected house was completely destroyed but thanks to the quick action of those attending the fire this was the only damage.

The fire took some 90 minutes to bring under control according to a resort spokesman who attended the fire and the fire department remained on site until sunup once the area was confirmed to be secure. Thankfully it was windless night for had a westerly been blowing the fire would have spread.

Apparently the house was occupied at the time but there were no reported injuries and all occupants were able to vacate the house safely.  The cause of the fire has not yet been ascertained but investigators are expected on site in the near future.

although this was not a thatched house and the house next door has melthoid shingle a gusting westerly could have spread the fire out of control onto nearby thatched homes. Certainly the resorts ongoing commitment to replacing thatch with aluminium ‘tin’ is a positive move towards a safer lifestyle.

More news on the fire later 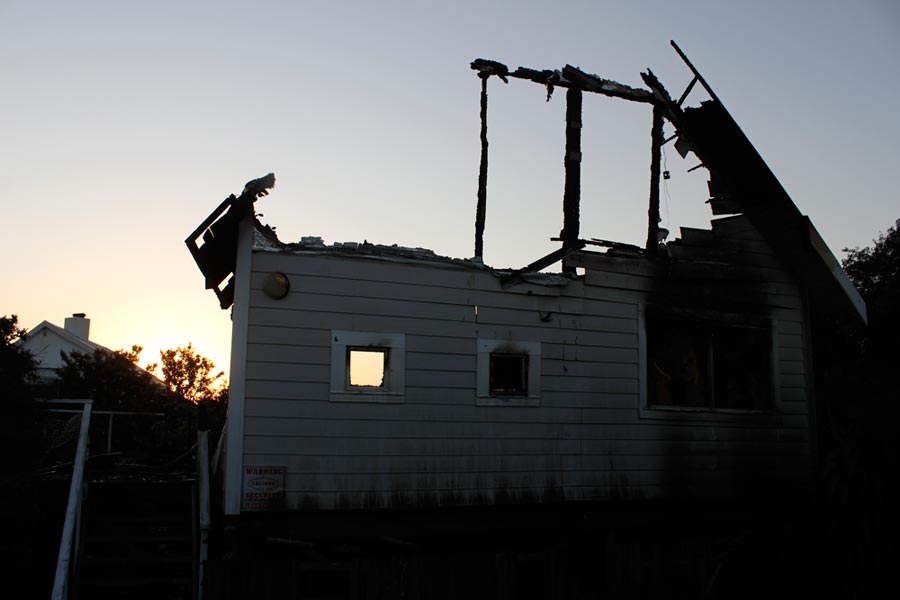 The aftermath of the fire in Cape St Francis Resort

What a wonderful Heritage Weekend in St Francis!

Just when we thought all kids spent their time texting or playing games on their smart phones, we were proved wrong for Cape St Francis was awash with teenagers this past weekend, all of them busy enjoying the great outdoors that we have to offer in this part of the Adventure Province. The reason for the inflow of youngsters, and of course their parents who certainly had a positive influence on our local economy qws the holding of two major events, the Billabong Seal Point Pro Junior surfing at Seal Point and the SA Schools Adventure Racing Championships 2019 being raced by some 150 teenagers that stared on the Kromme and finished at Full Stop Café in Cape St Francis. So great seeing youngsters doing what they should be doing, enjoying the sand, sea, sun and of course good old fresh air they don’t get to enjoy in the big cities where many came from.

The Billabong surfing was blessed with superb waves even if the sun was a little absent and a driving rain and near gale force winds on Sunday made it more than a little unpleasant for the gathered spectators. Watching those youngsters was certainly an eye opener for the quality of surfing, especially among the boys, was nothing short of spectacular. From a distance and not being a surfing judge one could easily have mistaken some of these youngsters for World Surf League (WSL) pro’s. A photographers dream for the waves rolled in in perfect sets  each set perfectly timed to allow the surfers just enough time to paddle back ready and waiting as the next big set to washed in.

A young up and coming surfer in action

But that was not the only action of course for it was the weekend of the much awaited Calamari Festival with so much on it was difficult to know quite where to go next.

Of course the golf celebrating its 22nd year is still the premier event of the weekend but their full field of golfers was certainly challenged across the road at the St Francis Bay Bowling Club celebrating their 20th Calamari event. Either greens, or are they called rinks, were ‘chokka block’ with players rolling their woods throughout the day.  And next door to the golf club the ‘fit crowd’ were raing their pulse rates and more than a little perspiration as competed in the inaugural Calamari Squash Classic that will now form part of the annual Calamari Festival.

The Calamari Cook Off certainly attracted some innovative cooks and although reigning champion JP from Full Stop Café, previously of Joe Fish was unable to defend his crown, Pam Golding’s Chokka Girls with their rather catchy SQUID HATS and Squid Earings were worthy and popular winners of his crown. Maybe next year JP!

Congratulations to Hantie van der Westhiusen and her St Francis Tourism Committee. When one looks back to the old Nautical event that was held some four or five years back, this replacement event has certainly grown and promises to grow in years to ahead as we, SFT predicted last year, to eventually compete in success with the Knysna Oyster festival. Well done guys. The Calamari Festival that has established itself as the premier Kouga over the Heritage weekend and it is now time that the Kouga Municipality recognise the importance of this event and its benefit to the economy of St Francis. Judging by reports on the Makiti held in JBay over the same weekend things were not so rosy so come on Mr Mayor, time to back the winning ‘horse’! (How Can They Prevent The Next JBay Makiti From Being A Disaster?)

And talking of Nautical matters, Sunday saw the 2nd running of the St Francis Runners ‘Nautical Half Marathon’. We do so wish they would change the name in line with all the other Calamari events. Te benefit of a strong brand identity would do them no harm and certainly add to the bulding of a great annual event in St Francis.

We left out a couple of awards when we congratulated some of the regional winners of Lilizela Regional Wards last week so here are all the Kouga winners as well as a Platinum Wine award for a local guest house.

The following accommodation establishments and activities in the greater Kouga / Tsitsikamma region were awarded for their efforts and are selected as the Eastern Cape finalists in the South African Lilizela Tourism Awards for 2019. The Lilizela Awards recognise and reward tourism players and businesses that work passionately and with pride to deliver a world-class product and service, and whose delivery grows South Africa’s global destination competitiveness.

All the finalist now progress to the national awards event that will be held in Johannesburg  in October so best of luck to all our finalists. Bring home the bacon.

And for food lovers, do not miss Dune Ridge’s superb Sunday Lunch menu offering this Sunday and a chance to order some of that wine from their Platinum Collection.

The opening two heats of Round 3 were an all-Australian take out with Cooper Chapman (AUS), Ethan Ewing (AUS), Jacob Willcox (AUS) and Morgan Cibilic (AUS) advancing.

Ewing and Chapman, both barely sitting within the Top 100 on the QS, upset compatriots Matt Banting (AUS) and Jordan Lawler (AUS) who are currently much more in the Top 10 conversation. The two surfers advancing are already guaranteed their best result of the season which will help them stay in the field for the major events of Hawaii and into the beginning of next season.

“All these guys are good friends and it was an important heat for all of us,” Chapman said. “Banting is looking really good for qualifying, Jordy (Lawler) is right up there and both Ethan (Ewing) and I are scratching to stay in the 100s so we all had our hunger out there. I was lucky to get that good start and just clung on with another clutch ride at the end.”

The following heat result came with absolutely no surprise as Miguel Pupo (BRA) and Jake Marshall (USA) have been on an absolute tear across the European leg. Both posted a 7+ score on the board to take the first and second advancing spots respectfully.

“There’s no explaining this good run, every heat is a different situation,” Pupo said. “The lineup here is huge, every couple of feet makes a difference and at the beginning I just tried to distance myself from the other guys and find some waves. I’m feeling really comfortable right now with the results I’ve just had and I probably have a different approach from the other guys who are trying to get the results. I’m just trying to keep my ball rolling.”

A pair of powerful goofy foots in Joan Duru (FRA) and Nat Young (USA) took out Heat 4 as Duru remains one of the last few current Championship Tour surfers still making heats in Ericeira. The Frenchman posted one of the biggest totals of the day with 15.17.

Pictured: Miguel Pupo (BRA) is guaranteed to improve his season tally and looks very strong for a return to the Elite Championship Tour next season. – Credit: © WSL / Poullenot

“I’m stoked to be here it’s definitely the start of a good leg in Europe for us,” Duru said. “Waves are super fun and the forecast looks good so I look forward to the rest of the event. I got to surf some other breaks around as well which were super fun too and less crowded.”

The following and last heat of the day seemed like a done deal midway through with World No. 5 Italo Ferreira (BRA) in a commanding position and Matthew McGillivray (ZAF) in second. But as waves seemed to no longer offer any sections, Ian Crane (USA) somehow found an inside ride with a clean vertical wall to attack on his backhand for an excellent 8.50, moving right into first place.

McGillivray wasn’t going to stop trying and as he swung onto a set wave, the South African locked in a succession of clean carves for a 7.77 to overtake Ferreira in the dying minute of their battle, ending the run of the event’s highest seed in impressive fashion. California’s Crane paddled in victorious and is guaranteed his biggest result in recent years.

“I haven’t claimed a wave in a while but I don’t know I was just so happy to make the heat,” Crane said. “I’ve never made it out of that round in a 10,000 so I was just so happy. Watching the waves before our heat it looked really fat so I knew I had a good score just cause I was able to do good turns.”

Senior Manager, Tour & Competition, Travis Logie decided to call competition off for the rest of the day as opportunities became far and few as the tide neared his highest point at Ribeira d’Ilhas. Competitors will be back at 7:30 a.m for the next call on Friday.