Probe to determine cause of St Francis fire

An independent forensic investigation is under way to help determine the cause of the devastating fire at St Francis Bay last week.

Eight houses were razed and four were damaged when the fire tore through Lyme Road North near the St Francis Bay Golf Course on Thursday evening (22 August).

“The fire was contained at about 7pm and fire-fighters spent the remainder of the night and following two days dousing the debris to prevent flare-ups,” he said.

He said in addition to the forensic probe commissioned by the municipality, the police were investigating a case of arson.

According to a police statement, two men were seen calming bees with smoke in the area where the fire broke out. Police have urged anyone with information to contact the investigating officer, Detective Warrant Officer Lwazi Solombela, at 071 475 1831. The information can also be shared anonymously via Crime Stop at 08600 10111.

Executive Mayor Horatio Hendricks expressed his condolences to all those who lost their homes and belongings in the fire.

“We are very grateful that there was no loss of life and would like to thank everyone who contributed to the fire-fighting efforts and helped to prevent further devastation,” he said.

Owen Wright (AUS) won the Tahiti Pro Teahupo’o presented by Hurley Stop No. 7 of 11 on the World Surf League (WSL) Men’s Championship Tour (CT), in six-to-eight foot (2 – 2.5 metre) waves at the world-famous Teahupo’o reef pass. The rematch of the 2018 Tahiti Pro Final with Gabriel Medina (BRA) was one for the books with some of the best conditions since 2014.

Wright  claimed his first event win in Tahiti after defeating Gabriel Medina (BRA), the two-time WSL Champion and defending Tahiti Pro winner. This is Wright’s first CT victory since the 2017 Quiksilver Pro Gold Coast when the Australian inspired the world with his incredible comeback from a traumatic brain injury he suffered at Pipeline in 2015.

“I can’t be happier,” said Wright. “Gabby (Medina) was always going to be the toughest matchup and I had no priority and I snuck into those few on the inside. I tried to get as deep as possible and still make it. I teared up out there when the hooter went. I’ve been working hard and I am stoked to win.”

In a rematch of last year’s Tahiti Pro Final, goofyfoots Wright and Medina battled once again at Teahupo’o but this time in heavy barrels. After a slow start, the heat turned into a barrel shoot-out at the twenty-minute mark and saw both surfers go wave for wave. Medina broke away with a 7.83 (out of a possible 10) and backed it up with a second 7-point ride, but Wright fought back with his own 7.73, only needing a 7.21 to win with eight minutes left. Under priority, Wright scored a near-perfect 9.17 to steal the title from Medina.

“I said I really wanted Gabby in the Final just to have that rematch and it was such a special time last year,” continued Wright. “The waves were just so perfect and to share that with a great mate was really special. When you come out here and in your first heat you get a 10, it makes things feel like things are coming. I haven’t won since Snapper and it has been so long. I won so early back then in my recovery and it has been so up-and-down and it has finally felt up and up and up in the last few months. I’ve tried to win this event a lot of times and it is amazing to finally get that today.”

Medina was not able to defend his title in Tahiti but still has the opportunity to defend his win at the Freshwater Pro pres. by Outerknown, the next stop on the WSL Championship Tour. The second-place finish vaults him up to fourth on the Jeep Leaderboard and another step closer to a third World Title.

“Owen (Wright) really deserved that one,” said Medina. “He started the day off with a 10-point ride and when someone starts like that, I think you feel like it is going to go your way. I am happy for him and stoked to be in the Final against him again. Last year it was me and today he got me. I love to compete against him, he is one of the best so it was good to get second to Owen.”

“I have to enjoy the momentum,” continued Medina. “It is hard to get the rhythm but now I feel like I am there. The win in J-Bay felt good and I think that will help me at the end of the year. Now I am just thinking about the wave pool. I cannot wait. I just want to thank God for the opportunity to have another Final with my great friend. This contest was unbelievable.”

Rookie Seth Moniz (HAW) captured his career-best performance today after making the Semifinals. Although the 22-year-old fell to runner-up Medina, he showcased his talents in heavy-water conditions in his freshman year on the elite CT. Moniz eliminated injury replacement Caio Ibelli (BRA), who sat right on the requalification cut-line before this event. Ibelli now moves up to 18th on the Jeep Leaderboard and betters his chances of qualifying for the 2020 CT next season after falling short last year.

It is estimated that here are some 5-trillion pieces of plastic floating in our oceans and it takes about 450 years for a plastic bottle to totally degrade. Something has to be done and here is a start up that is trying to make a difference.

The crew behind Shaka Surf decided that there were enough bottle caps floating around for them to be able to source enough plastic waste to produce a very funky and eco-friendly surf fin.

The Shaka Surf eco surf fins are made from recycled bottle caps and other recycled materials to form a composite material, which then goes into the moulding fabrication. The fins are eco friendly, and with their composites, offer great performance.

The man behind Shaka Surf, Dominick Taylor, describes his ideology behind the concept. “We’re taking plastics out of the ocean and putting them to better use,” said Taylor of the basis of his company. “I think that most surfers and non-surfers alike appreciate what we do.”

The Shaka Surf fins are designed for use with longboards, SUPs, single fins, retro boards, cosmic cruisers and high performance

shortboards. They are environmentally friendly, high performing and ultimately helping reduce plastic waste in our oceans and beaches. Their fin guide is right here https://shaka-surf.com/our-fin-guide

“To be a surfer is on the one hand a very selfish pursuit,” said Taylor. “It often means you’re going to let down people close to you because you want to go surf good waves at the drop of a hat. On the other hand, I think most surfers have some level of environmental awareness and will do their best to be good custodians of Mother Earth. So, being a surfer for me is about surfing when there are good waves, and trying to give back a little whenever I can.”

As well as recycling waste materials and plastics to make their recycled fins Shaka Surf also wanted to create a standout design. So they enlisted the help of a street artist to come up with a unique aesthetic. This lead to the development of the Swell LinesCollection, paying homage to surfing culture and oceanography. See more here https://store.shaka-surf.com/products

The Shaka Surf store is here –  https://store.shaka-surf.com/ – remember to drop the code SHAKA10 at checkout for 10% off all orders.

Collated and distributed by – The Truth Collective

Actress inspires girls from her hometown

A Humansdorp-born celebrity returned to her hometown this month with an inspirational message for girl learners from a local high school.

Using song and drama, Baartman shared intimate details of her life journey with the more than 1 000 girls in attendance.

Her tale touched on challenges she had to overcome growing up, including typical temptations young people face when they first leave home and an unplanned pregnancy which led to an abusive marriage.

“Stephanie took a few wrong turns in her life, yet she found the courage and strength to get back on the right path and pursue her dreams,” the Mayor said.

“No matter how bad a situation you find yourself in, there is always a way out. That was the message I wanted girl learners to hear this Women’s Month and Stephanie proved to be the perfect messenger.”

The girls were captivated by Baartman’s show and the hall’s roof just about lifted as they cheered her performance.

As one learner put it: “Stephanie, your story took me many places today. It touched my heart in different places. I never thought things like that can happen to you. I thought you were just a happy woman and that everything is beautiful in your life because you always wear a smile. I just want to say thank you.”

Hendricks said that his office would be working with the school to put support measures in place for girls who need help negotiating difficult situations.

The programme concluded with each girl receiving a balloon, blowing all their troubles into it and releasing it into the air. 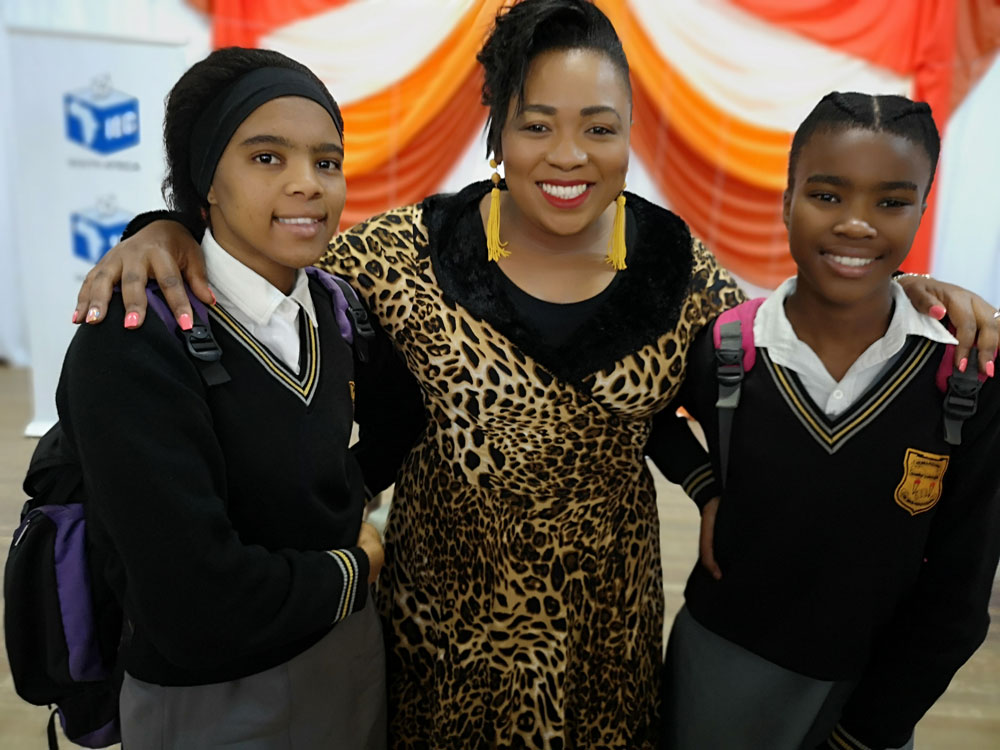