Executive Mayor of the Kouga Municipality, Clr Horatio Hendricks, has commended Write-On publishing’s Frank Nunan on the publication of the two books “Impressions of Jeffreys Bay” and “Impressions of St Francis”.

Speaking at the launch of the two books in Jeffreys Bay last week, Clr Hendricks said the two books play an important role in the promotion of the Kouga Municipality and urged Write-on Publishing to consider looking at other areas in the Kouga such as Humansdorp and the Gamtoos Valley for future projects. He said the municipality fully supported initiatives such as these and was willing to work with any stakeholders who undertook to promote the Kouga region.

Clr Hendricks was presented with copies of the two books, as well as copies of other books produced by Write-On publishing which dealt with the Kouga. These included “A Taste of St Francis”, “The Sea Shells of Jeffreys Bay” and “Humansdorp se Groei en Bloei”.

The launch, which was attended by about 70 people at the Seashells Conference Centre in Jeffreys Bay, was opened by former Ambassador Mzuvukile Maqetuka. 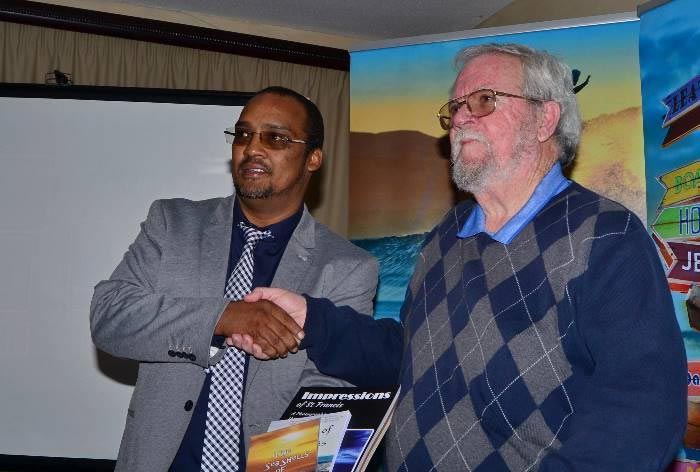 NSRI Jeffreys Bay recently gave SFDVG a huge boost in resources when they donated  a Skid Fire Protection Unit to the local disaster group. The unit had been donated to them by BuCo but as the NSRI’s mandate is to save lives on South African waters, coastal and inland NSRI felt that the SFDVG will be more ably suited to fully utilize the donated equipment for their role as first responders in the event of a major fire or disaster in the area in cooperation with the Kouga Fire and Rescue Services.

SFDVG’s Liezl Clause thanking Rieghard Janse Van Rensburg, Station Commander and his crew for delivering the much needed equipment to our DVG Centre.

To ensure the mobility of the Skid Fire Protection Unit St Francis Links donated a trailer so that the unit is always mobile and ready for deployment wherever it may be needed.

Together with Foster and Kouga Fire, the DVG will be assisting in a controlled burn  over a 5ha area in the Irma Booysen reserve between 17 and 20 June.  The actual 1 day burn will be weather dependent so the public will know a few days prior which actual day it the burn will be conducted one. DVG volunteers will be on standby with bowsers, as well as being responsible for potential traffic control.

A full press release with details of the burn will be published tomorrow.

The Corona JBay Open, mens and womens surfing event, the biggest surfing event in the country descends on JBay in July and will be the anchor event of the Jeffreys Bay WinterFest that runs from 6th to 22nd July this year.

Many who live in the region are familiar with the event and its fiscal importance to the Kouga region but for those new to the area, St Francis Today will be publishing a series of informative articles on both the surfing event that attracts a huge International viewership as well as information on the many other events that make up te Jeffreys Bay WinterFest.

From its modest beginnings back in the early 80’s, to what it is now, a massive event with a huge global audience, the professional surfing competitions at Supertubes have always been about the surfers, and for the surfers.

From the days of local resident and entrepreneur, Cheron Kraak association through the Billabong/Country Feeling editions, to the current Corona JBay Open, the contest has always enjoyed a warm and special vibe about it. Possibly it’s cold early morning starts with icy cold, the cold, stiff offshore breeze, the icy water, the sharp rocks and big sets, or maybe even the subtle awareness of sharks, but the JBay event has always been the one to compete in.

“It is one of my favourite places to be in the world,” said Durban-born two times event winner Jordy Smith of JBay. “It has such a unique feel to the place. Something different.”

Last year the Women’s Tour was introduced to the event and there is no doubt it added to the event as only the wonderful women from the Championship Tour. The ladies are back this year adding not only the the great surfing but adding their own touch of style and beauty to the event and adding a whole new group of spectators attending and watching online.

Mick Fanning got bumped off his board during the final of the 2015 event while competing against fellow Australian Julian Wilson. Fortunately no one was injured although the surfers were a little shaken up by the encounter.

Since then there has been a step-up of shark mitigation processes with drones and spotter planes now used to ensure there are no repeat surprises for the competitors for the safety of the surfers is paramount.

There have been many stellar performances over the years, which is bound to happen when the best surfers in the world meet up with one of the best waves in the world. Kelly Slater has forever been one of the most incredible standouts at the event, with four titles behind him, but there are a group of Australian natural footers who have always dominated at Supers. Mick Fanning, Joel Parkinson and Taj Burrow have all retired from profession surfing, but their legacy at JBay will live on.

The South African wildcards always draw local support and several locals have attained wildcard entry to the event including St Francis’ Dale Staples, WSL World Long Boarding Champion Steve Sawyer of Jeffreys Bay with last year it was another Jeffreys Bay surfer, Matt McGillivray who entered the water as our wildcard.   These days the wild card goes to the highest placed South African on the global World Qualifying Series (WQS) Tour prior to the event starting.

Talking of the girls event, this year will be the first that the competition will see pay parity in the prize money, with the winner of the Women’s division receiving the same as that of the Men’s division. In their first event at Supertubes last year since the year 2000, the girls embraced the opportunity they had been given, and threw everything at it at every opportunity.

The town of JBay is blessed to have a wave like Supertubes on its doorstep, attracting the World Surf League and the best surfers in the world. There are very few such towns on the tour that enjoy this sort of close proximity and intimacy with the waves and the surfers. Lets hope that this year is a cracker of an event.

Thank you to Surf Journalist Craig Jarvis for information input