Things are a happening in and around the village with roadworks, a new pathway and at last … (well maybe) .. a permanent drop off zone and recycling facility.

Those using the R330 to / from Humansdorp or visiting The Links will have already encountered the roadworks in progress at the entrance circle to St Francis Bay. In a joint venture between St Francis Property Owners SRA and St Francis Links the entrance to the town is about to be beautified offering a nice welcome to visitors to our town as well as, and probably more importantly, better road quality.

It is a three month contact and was awarded to Mawethu Civils with EAS the engineers supervising the project. This is an  SFPO project funded through the SRA Levy and co-sponsored by St Francis Links.

During the construction process there will be a certain amount of disruption to traffic which will include the partial closure of the entrance as well as Lyme Road North and South. SFPO and the contractors have asked e asked that motorists to exercise both patience and caution during this period.

Motorists are encouraged to access and exit the Village via Homestead Road or Tarragona Road. Heavy trucks and delivery vehicles are requested to use Tarragona Road.

The project will be completed ahead of the Easter holidays. 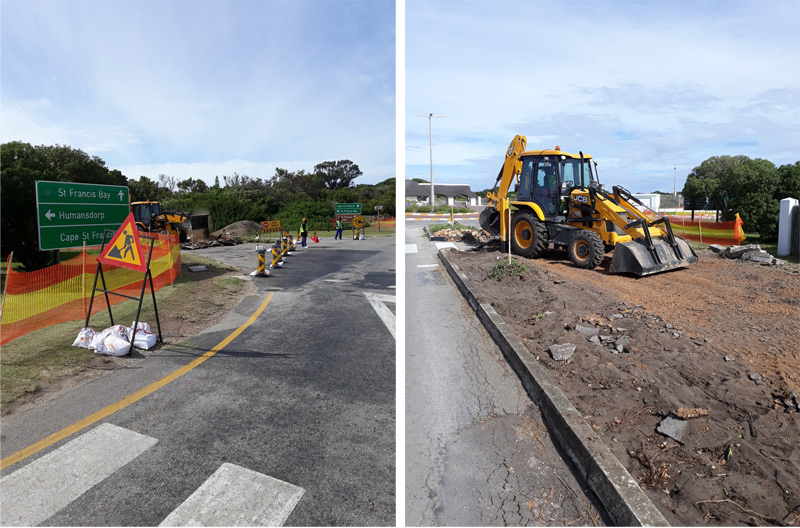 In other news put out by SFPO yesterday it seems the long delayed pathway project between the CBD and Sea Vista is about to get underway. The project is is being funded by the Kouga Wind Farm Community Trust under the guidance of the SFPO who are in the process of appointing an Engineer and Project Manager to oversee the contract. 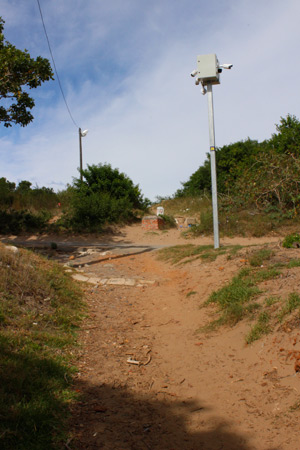 The existing pathway is notoriously dangerous with regular reports of criminal elements preying on woman and children and the pathway being both lit and covered by CCTV it will hopefully give peace of mind to those using the pathway particularly afe dark.

And in news that will bring joy to those who are commited to recycling, it seems almost certain that the drop-off point set up over the holidays will become a permanent facility. In news from the council, the drop-off and recycling is Jeffreys Bay has already been finalized with Enviroman Recycling Company appointed to manage the facility. Hopefully this augurs well for St Francis Bay as it is an essential.

News from SFPO is that the depot will accept glass, tins, recyclable plastics and paper/cardboard and all garden refuse providing it is dropped off in bags that will removed by the Municipality on a regular basis.  Garden services will be allowed to make use of this facility provided their garden refuse is in bags. Anything that is not in bags will have to be taken through to Humansdorp. It is hoped that this facility will help to reduce the incidences of illegal dumping of garden waste in public open spaces and undeveloped plots. Building rubble cannot be accepted at this depot and must still be taken through to Humansdorp.

This year’s JBay Winterfest will take place from 6 – 22 July, and looks set to be another exciting 2 weeks of surfing, live music and a whole lot more.

The Corona JBay Open Men’s and Women’s surfing contests will be the anchor events of the festival, with the best male and female surfers in the world descending on JBay and the perfect waves of Supertubes.

Filipe Toledo from Brazil is the defending champion, and he also won the tournament in 2017. Therefore this year he will be going for a hat trick, which has never happened at a Championship Tour level at this venue. Filipe redefined high performance surfing at this contest in 2017, with a fast and futuristic aerial surfing performance, resulting in a perfect 10-point ride for one incredible wave, as well as the contest victory.

Jordy Smith from Durban is also a two times event champion and is always a well-supported surfer, with the local crowd cheering him on from the rafters whenever he takes off on a wave. He is always one of the best surfers in the water, and has the distinction of surfing a perfect 20-point heat back in 2017. Jordy finished fifth on the World Surf League Championship Tour’s Jeep Leader Board in 2018 and will be wanting to improve on that ranking this year.

Wade Carmichael from Australia was the stand-out surfer last year, competing on his first year on the Championship Tour. The rookie took out the talented Conner Coffin (USA) in the quarterfinals and Jordy Smith in the semifinals. Coming up against Toledo in the final, the powerful natural-footer surfed with confidence and aggression, but fell on a final air attempt in the last few minutes, and finished runner-up to Toledo. His power surfing was well-suited to the long, open faces, and he will no doubt be full of confidence coming into this year’s event.

Kelly Slater, the USA’s 11-times world champion, will be competing for the last time as a Championship Tour surfer this year, having announced his upcoming retirement at the end of 2019. Slater has 4 victories to his name at this tournament, and has often described it as one of his favourite events in the world. Slater injured himself while free-surfing here in 2017, and has been struggling with his form ever since, but has made it clear that his final year on tour is coming with a focused and determined competitive act. It is a well-known fact that Slater is hungry for a 12th World Title, and this year will be his last chance to secure it.

On the Women’s tour, event defending champion and current world champion Stephanie Gilmore from Australia will bring her smooth and stylish approach to the event again, hoping to claim her second win to follow on from her victory at the inaugural event last year.

We can expect Lakey Peterson (USA) and Carissa Moore (Hawaii) to be hot on her heels this year, along with surfers like fierce Brazilian competitor Tatiana Weston-Webb, and the dynamic and popular Hawaiian surfer Coco Ho.

This year will once again have the popular free music shows, and they will be moving across to the Supertubes Park. Live In The Park will feature a range of top South African bands and musicians performing live.

Last year the live music was one of the highlights of the festival, with large crowds gathering to watch the bands, enjoy the vibes and chill with a few Coronas at sunset after long days of excellent surfing.

The band names will be announced soon. Many of the bands who performed live last year called the JBay Winterfest one of the highlights of their year, so we can once again expect top bands to be part of this year’s jol.

Alongside the surfing and the live music there will also be a Skins Fishing Tournament, a Funduro dirtbike event, as well as a Trail Run and more. The details of these events will follow.