THERE is a high probability that arson was to blame for the fires which razed ten houses and severely damaged three more at St Francis Bay on 18 December 2018.

That is the finding of a fire assessment conducted by Phoenix Fire Protection Services on behalf of Kouga Municipality.

The full assessment was tabled to the Kouga Council last week. It includes an analysis of the weather conditions on the day, the possible causes and sources of ignition, as well as the actions and resources that were used to fight, control and extinguish the fire.

According to the assessment, three fires occurred in the St Francis area on the day. It is the latter two, both believed to have been started deliberately, that led to the houses burning down.

The first fire broke out near the waste site at Sea Vista and was reported to Kouga’s Fire Department at 10:45am.

While Kouga fire-fighters and teams from the St Francis Links and Disaster Volunteer Group were fighting this fire, they noticed “short intermittent puffs of smoke (30 – 60 seconds apart)” in the area where the second fire started.

The assessors are of the view that the distance between the two fires was too great and the wind direction wrong for the second fire to have been caused by the first.

Closer inspection of the second fire’s growth pattern further revealed a number of spots, in close proximity, where ignition could have occurred.

“It can safely be assumed that fire no 2 was set deliberately and with malicious intent in an extreme gusting westerly wind. The puffs of smoke could also indicate the use of some sort of flammable liquid,” the assessors found.

While fire-fighters were battling the second fire, a third fire broke out in the Sea Vista Primary School premises, near two of the houses that later burnt down.

According to the assessment, there is also a high probability that this third fire was started deliberately.

“Although it could be possible that fire no 3 was started from flying embers from fire no 2, such an assumption is not consistent with the wind direction at fire no 2 at the time,” the report states.

“It is the opinion of the assessors that fire no 3 was also suspected malicious arson.”

The assessors further praised the manner in which Kouga and other roleplayers rallied together to fight the fire.

“Although we feel deeply for the victims of the fire who suffered severe losses, we are thankful that no loss of life occurred and that the fires were contained in the best possible manner with municipal resources and other valuable public resources,” they say.

“The municipality of Kouga, surrounding municipalities, the public of Kouga and specifically the St Francis Bay community provided a shining example of standing together under extremely trying circumstances.” 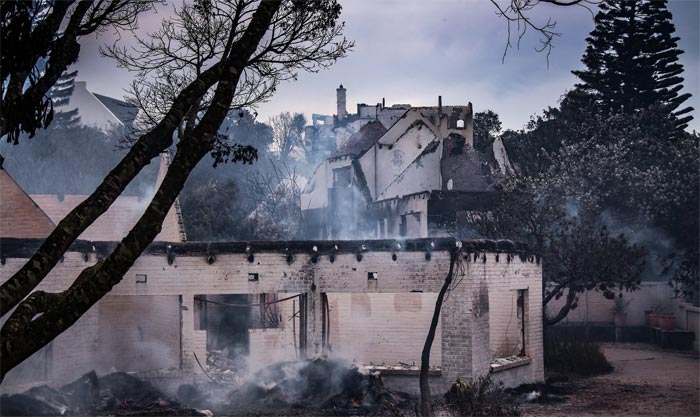 “The municipality has been holding weekly roadblocks with the South African Police Service to clamp down on illegal public transport operators and will continue with this joint programme to help make our roads safe for all,” he said.

He encouraged commuters to familiarise themselves with the documents required by public transport operators and to avoid making use of taxis that do not comply.

“There are four discs that should be displayed on a taxi’s windscreen – the red public transport permit, the operator’s disc, passenger liability disc and standard licence disc. If these discs are not visible and valid, there is a good chance that you are making use of an illegal taxi,” he cautioned.

Hendricks said the municipality established the depot for the impounding of vehicles at Humansdorp some 18 months ago.

“The depot has made it easier for our Traffic Department to execute their duties and keep commuters safe. The facility is not only used for taxis but also for vehicles that have been confiscated in drunken driving and other cases.”

He said while some of the taxis impounded in December and January were second-time offenders, the majority were first-timers.

“The law is clear and we would like to appeal to public transport operators not to put vehicles and drivers on the road that do not meet the legal requirements.”

The fees applicable for the release of impounded vehicles are R2500 for a first offense, R4000 for a second offense and R8000 for a third-time offense.