Should it be a stop or a yield

It is good to see the traffic watchdog being more visible but surely they are barking up the wrong tree if their efforts are aimed at only minor transgressors rather than those who are endangering others.

Last week three traffic officers camped out on da Gama Road, Cape St Francis in site of the stop street. Now this must be a major accident hotspot for it attracts regular traffic department attention. Or is it that issuing fines for not wearing a seat belt or failing to come to a complete stop when turning left into da Gama Road is a rather profitable way to earn municipal income without raising a sweat? And of course there is a handy little shop where one can buy a cool drink if the hectic action gets too hot.

Should turning left at this particular stop street be necessary? Surely a ‘Yield on Left Turn’ sign should be in place. It is not a four-way-stop and there is no possible likelihood or danger of a collision. There are areas where this is allowed and in fact the four-way-stop on Lyme-St Francis Drive-Peter Road has a yield on left turnout of Peter Road. Now this is a really busy intersection so surely if the traffic authorities can deem it safe to turn left here, surely the stop at Cape St Francis should be considered? Or is it too much of a cash cow?

Maybe the Cape St Francis Civics Association need to have a chat to the powers that be.

If the traffic department so desperate for funds possible they could do a lot better by a installing a speed trap opposite Sea Vista / China town. Although a 60kph zone and part of it on a solid white line it is not unusual to be passed by vehicles travelling well over 100 k’s an hour. One day a kid playing on the side of the road will be killed by a speedster either trying to avoid a goat or pig and all hell will break loose. Burning tyres and all 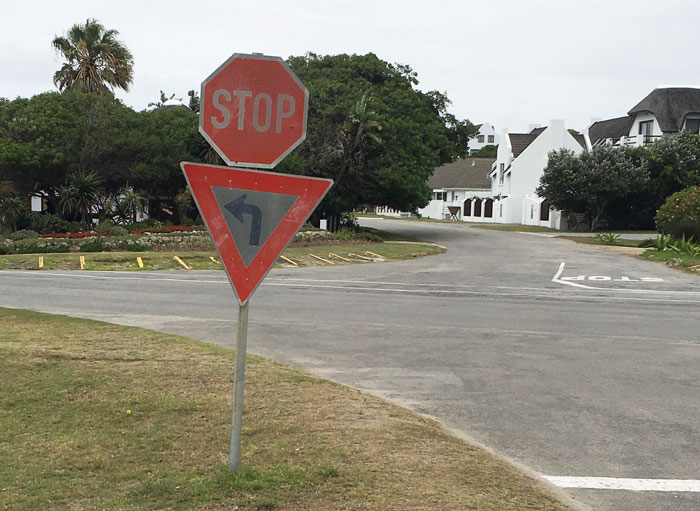 Intersection on St Francis Drive allows yield to left – why not the same from R330 into Da Gama Road, Cape St Francis?